There are several large reservoirs in southern Karnataka which allows for constant irrigation, even in the dry season of crops like coconut and rice and sugar cane which are major cash crops in the area.

The agriculture was just so different than anything I’ve ever experienced I kept a list of all the food crops I saw being grown, followed by a few crops I did not see being grown but saw offered at the markets.

This is an ideal example of multi-cropping: the coffee grows best under shade, the coconut palm needs lots of sun and grows very tall, and the black peppercorn vine needs a tall tree for support to climb above the understory. Brilliant!

A photo from Maine…but cabbages look the same in India! 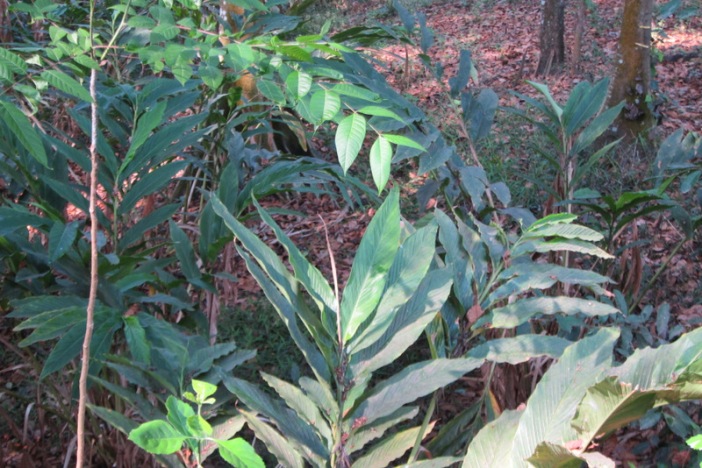 The cardamom flowers and forms pods at the base of these “frond-like” stems. 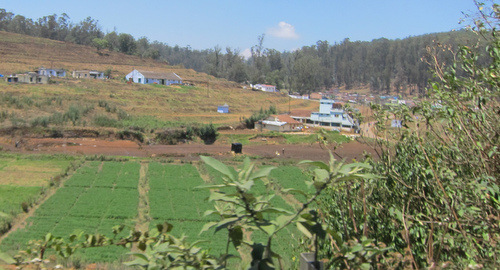 Seen in the highlands of the Nilgiri mountains. This photo was taken driving through Ooty, an old Colonial “hill station” with a mild climate at over 7000 feet elevation where they also grow potato, carrot, cauliflower, peaches, plums, pears, and strawberries.

They smell like orange and jasmine blossoms combined…SO sweet…it’s amazing that the seed is so bitter. 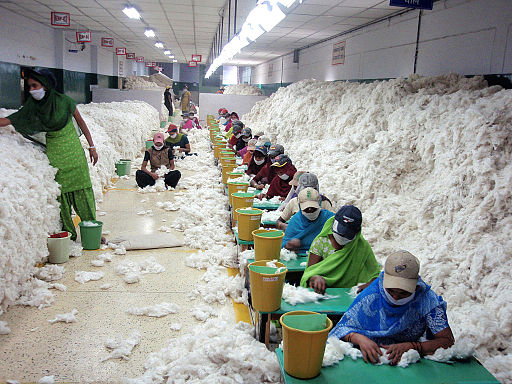 YES. All things cotton start with some form of this work… 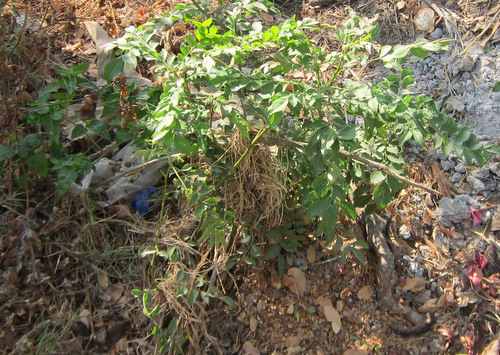 Like basil in Italy, this stuff just grows everywhere…no one has to plant it. Everyone uses it every day. 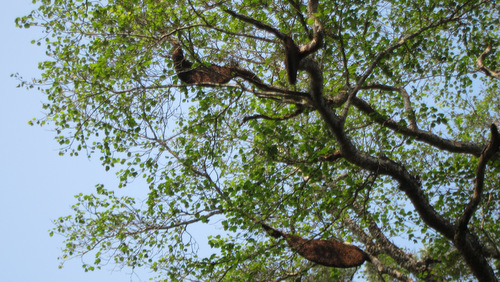 In this case, honey from coffee blossoms hanging high in the trees providing shade for that coffee. According to our guide a “special tribe” of people visits the coffee plantation once a year to harvest the wild honeycomb as has been done for many many years. 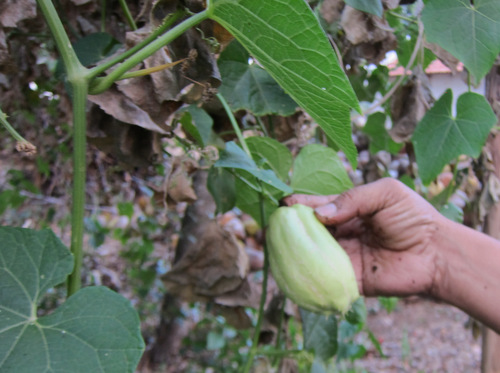 This is the “apple of the tropics” (my term): crispy, sweet, and it makes good jam/jelly/marmalade. 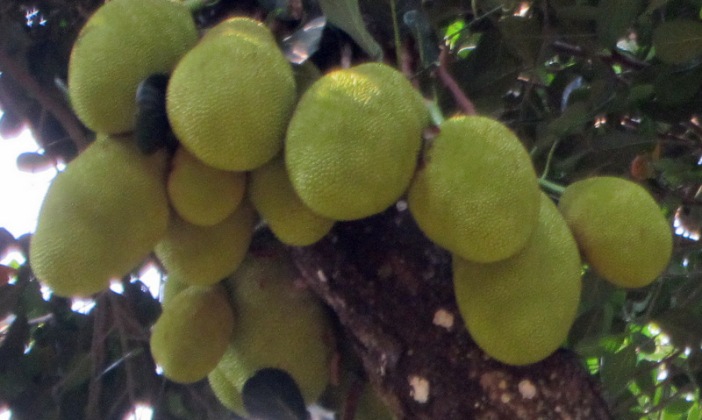 This fruit was so interesting it got its own story. 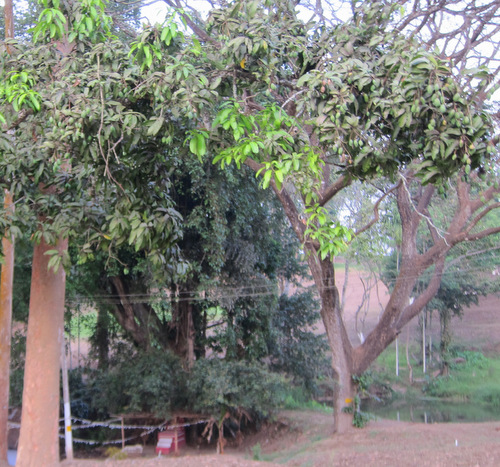 Actually “Finger Millet” which is totally different from the millet that is usually sold as bird food in the US, often Proso millet. The Kannada word for this staple food is ???? or ragi. 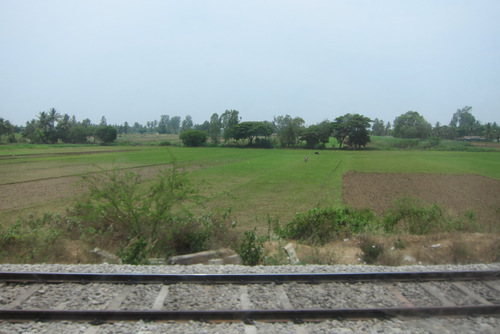 A bad picture of large rice fields along the train line between Bangalore and Mysore. I noticed that the locals called the raw grain as well as the field where it grows “Paddy” and only the cooked version “rice.” Although rice fields do not need to be flooded, they are a water hungry plant and flooding also provides weed and pest control. The area around Mysore benefits from several large reservoirs in the area that can provide water for irrigation and flooding year-round, so it is a major crop in the area we traveled. India is the second largest rice producer in the world. 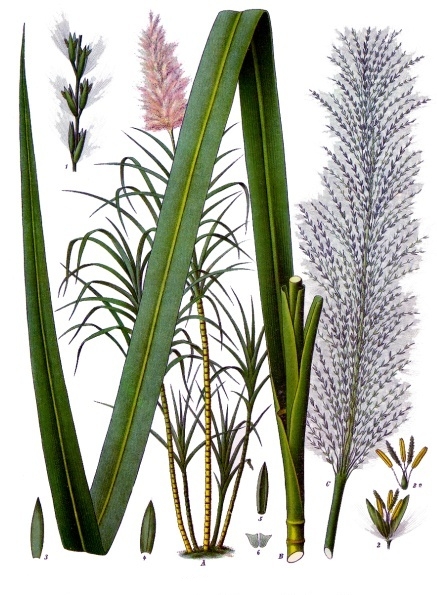 Again, this was such a common sight along the roadside — coconut “orchard” then rice paddy then sugarcane then banana field then coconut trees…etc. — that I never thought to stop for a photo. The Trust did not grow this crop because it was water intensive and so dependent on fertilizers and pesticides that they don’t consider it a sustainable crop. Plus they feel that the local farmers rarely profit after accounting for input costs plus labor because of the way the commodity pricing is set far away from India . Meanwhile people do use some of the crops in fresh squeezed juice as a beverage, and also in the production of “jaggery” which is a homemade sweetener (very much like maple syrup) that contains the molasses. Sugarcane juice is squeezed by a press and then boiled in an evaporator until it can harden.

In the mix with the coconut/banana/sugarcane/rice regularity there were a few blocks of tall and willowy tamrarind trees. Tamarind pulp is one of the flavors that makes Sambar sing… 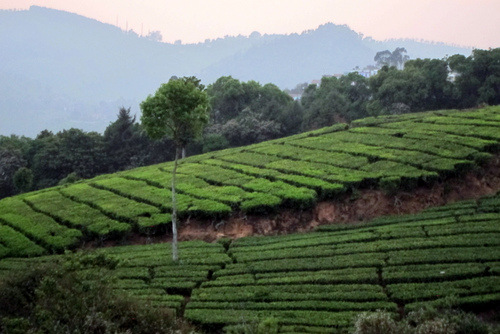 Specifically the species Camellia sinensis that we call “green tea” or “black tea” and think of as coming from China. Obviously it’s a major crop in India as well. Darjeeling is the most famous Indian type of black tea in the US, but we visited the area of another significant Indian tea that I had never come across: Nilgiri tea named after the high mountain district around Coonoor where we had our Farm Stay. The British brought tea plants from China to be able to grow this important British staple while avoiding the messy export arrangements with the Chinese. At the same time a different subspecies of tea, C.s. var. assamica, is native to the border region between Bangaladesh and Burma. That variety of “muskier/maltier” Assam tea is grown at sea level and often found in “Irish Breakfast” blends.

Jamun Plum
Actually not a Prunus genus, and not a corruption of “Damson” but Syzygium cumini, an evergreen tropical tree in the family Myrtaceae. Locals make a popular milk based dessert called Gulab Jamon that does not use this plum, but is shaped to resemble it.
(Our plantation guide showed us a ripe plum he found, but I did not photograph it)

Following are crops we did not see in the field but were told (or saw evidence in the market that they) were growing nearby (although it’s entirely possible we “saw” these crops but just did not recognize them): 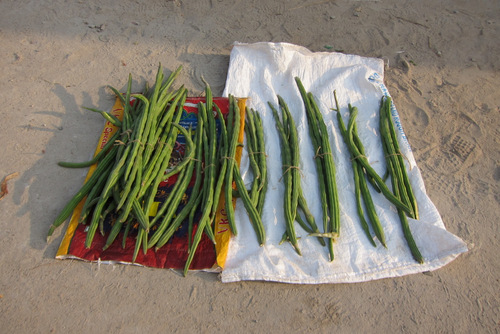 This pod is like a cross between okra and asparagus, and was also a central ingredient in the Sambar I was served.

as well as these significant lumber crops (all of them often interplanted with coffee to provide shade):