According to their website’s home page the Janapada Seva Trust is “a voluntary organisation functioning in and around Melkote a mofussil town” [meaning rural and not originally part of the East India Company regions of Bombay, Calcutta, and Madras] ” in Mandya District of Karnataka, India since 1960. Inspired by the ideals of Mahatma Gandhi and Sarvodaya philosophy the Trust has been striving to create a non-violent, egalitarian order of society. Its core area of work is welfare, education, rural industry, environment and agriculture.”

“Over the years the Trust has built a fine infrastructure for its activities. The accent of the Trust is on self-help and people’s involvement, the Trust seeks support not so much from the State as from people who care.”

We were told by it’s founder, Surendrah Koulagi, that it all began when a 10 year old boy learned about Ghandi’s Salt Satyagraha, or Salt March, that took place in 1930 as one of the first acts of a self-declared sovereignty from the British Empire by the Indian National Congress. When Mr. Koulagi began to understand the philosophy of non-violent civil disobedience, the power found in the action, and the simplicity of its message (“Satyagraha” is a synthesis of the Sanskrit words Satya (truth) and Agraha (insistence on)) he wondered what other important things could be accomplished by a simple insistence on the truth.

Beginning in 1960 with his wife — and now continuing with the work of his son and other family members — Surendrah and the Trust have contributed many significant works to Melkote and the surrounding communities. Their hope, as I understand it, is to develop self-reliance and sustainable living models in Melkote and possibly all over India.

From the very beginning the Trust has worked with displaced children, and they continue to do that today. One of the first things we were introduced to after arriving at the Koulagi home in Melkote were several smiling happy children and infants currently being cared for. Some of the children have been abandoned by their parents, and some are living under “Care and Protection” (essentially Foster Care) until they can safely return to their biological families. 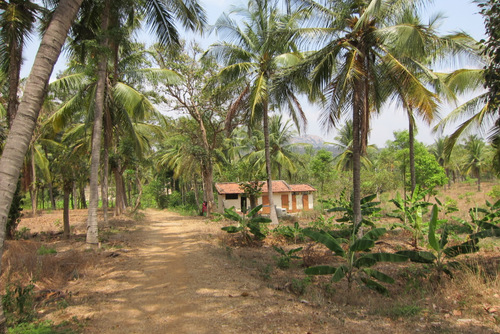 We saw two other areas of work that take place at another site (Hosa Jeevana Daari) a few miles outside of town in what is largely a farming area: dyeing and weaving cotton “Khadi” cloth and demonstrations of sustainable agricultural practices (largely organic and/or biodynamic) for the local crops of coconuts, bananas, and other fruits and vegetables.

On the website Khadi is simply defined as “non-violent cloth” but there is great depth to that statement. The cloth is made from Indian grown cotton, organic and non-GMO whenever possible. Indian agriculture has embraced GMO cotton on a very wide scale which has fundamentally changed the relationship between a farmer and his crop, specifically the ability to keep back seeds from cotton processing and continue to replant and refine site specific strains that work best for each farmer in their micro-climate and field conditions. The Trust considers this a non-sustainable environmental issue and therefore is working with farmers to grow heritage Indian cotton varieties organically. One incentive for the farmers is that the Trust will buy that organic cotton, dye it using natural materials, and then weave the dyed and un-dyed thread into cloth that can then be sold in bolts, or further sewn into commonly worn local garments.

In addition to promoting against the GMO crop model, and promoting for organic agricultural methods, the Khadi work of dyeing and weaving has become a training tool for local employment and the development of useful skills. The hand looms they’ve rescued and restored to working order are incredibly simple wooded structures, and yet each of them, with one operator, can weave meters of beautiful cotton cloth 2000 threads wide every day. It is truly an inspiring operation from the material origin addressing farmer economics and health, through the transfer of skills to people who can use them to earn an average or above average wage, to the production of beautiful materials that are also healthy for everyone involved. 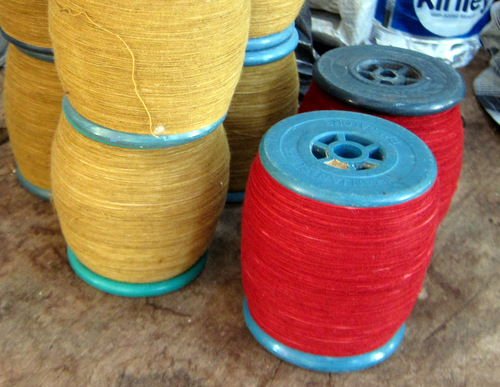 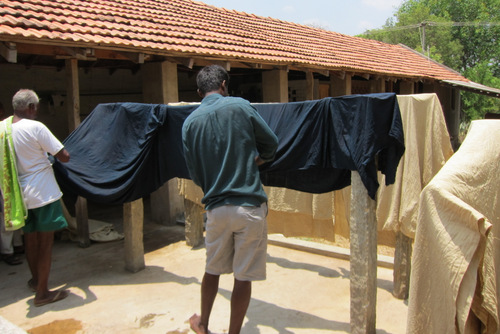 Their agricultural demonstrations appear to be on a much smaller scale and are simply a way to show that common local perennial cash crops (primarily coconut and banana) can be grown without relying on pesticides and in a less water intensive manner. According to the Food and Agriculture Organization of the United Nations India is, by far, the largest banana producer in the world, although largely for local consumption and not export. According to Santosh Koulagi, Surendrah’s son and farm manager, bananas are typically grown in two year cycles from tissue cultures that farmers purchase. Santosh has been able to keep his banana trees productive for five years using some simple techniques such as on-farm compost amendments. 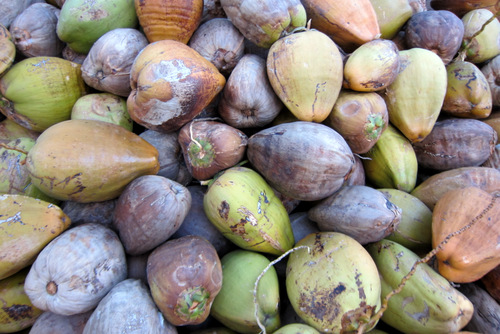 Likewise Santosh is experimenting with various low-water techniques for growing coconut palms, which are a water intensive crop. Other crops that I saw included black pepper vines and coffee bushes (both prefer growing in the shade created by the coconut palms overhead).

The Hosa Jeevana Daari farmsite is a peaceful and productive place. Several families live there full time tending the crops, dyeing the cotton, and managing a team of pure native cattle who help on the farm. Local people arrive there to work on the looms weaving bolts of Khadi cloth. Others arrive (as we did) to learn about the Trust’s work with agriculture and industry demonstrated there. The Trust is currently building a new dormitory next to the building housing the looms which will allow them to host more visitors for longer periods who want to find out if these ideas could work in other places.

As hot as the days could be with the sun directly overhead the air under the canopy of trees overhead the farm felt very comfortable and calm. Standing in front of the loom building at mid-day it sounded positively alive with energy and ideas. It’s amazing to see pictures of children who had landed at the Trust long ago returning as adults during various reunions and realize what the idea of ‘sustainable growth’ can really mean, whether it involves growing healthy food for the community, generating useful materials, or helping individuals grow and thrive in India. It’s very exciting work and I’m glad that I got a chance to learn about it, as well as to get to know the Koulagi family who were so warm and generous to us during our visit.