[Yes, our driver DOES speak a little French…]

Where to begin; at the end of course — at The Dictionary of Flavor restaurant in an upscale pedestrian mall area of Chengdu (where you can buy silk embroideries for THOUSANDS of dollars each) I crossed off almost everything left on the (written!) list of flavors that I wanted to sample:

At one point I might have said that Xinjiang was ‘killing us with kindness’ where as Chengdu appears to be killing me with endless awesome dishes.

No, of course we couldn’t eat everything between the three of us, and there is a twinge of guilt there, but our driver got some leftovers, as did Guide Tom, so we hope there was no true waste, as the farmers do work very hard to make this possible.

Earlier in the day we toured the People’s Park (a Lonely Planet highlight) where many people were performing their daily exercise to the funky techno-beats blasting out of souped up sound systems. Around a central yard were many separate spaces, like petals on a daisy, each of them featuring a different activity, some of them participatory, and some of them almost performances, and all of them trying to drown out their companion performances with a few extra amps of sound…Alison could NOT stop laughing.

Luckily most of the park was not throbbing with TechnoCise but was much more low key and contempletive, including a bonsai garden, an orchid garden, and a tea garden where we sat down and enjoyed some of the local green tea using the local service of Earth-Man-Heaven (plate-cup-cover) and a huge thermos of hot water. Guide Tom was being careful about his afternoon caffeine intake and instead ordered a lemon tea (dried lemon slices) with mulberries and rock sugar. It was somewhat quiet with the murmur of easy conversation around us, the buzz of cicadas above us, and the occasional jangle of a passing ear cleaner shaking his tools in offer of an ear cleaning. We spent a pleasant couple of hours sipping tea and discussing life and death and sickness and health, truly an enlightening experience.

Earlier in our tour Guide Tom explained that the new Chinese President, Xi Jinping, had made it his priority to crack down on corruption among government officials, and since taking office earlier this year he had already made a drastic change in those officials’ lives: they could no longer spend more than 40 RMB (about USD $8) on any meal unless they paid the balance out of pocket, and kept the receipts to prove that they did not get ANY free services or food. This has emptied most of the shiny banquet halls and hot pot restaurants where the local officials preferred to hold court on the country’s dime. This situation explained the nearly empty hot pot palace we dined in last night, as well as the half-empty hall at the home of the world famous Mother Chen’s bean curd dish called Mapo Dofu that has since been turned into a tarted up large dining hall for officials and tourists — Guide Tom had to remind his waitress that he was NOT one of the tour guides who allows their High Noses to be overcharged and then demands a kick-back for leading them to the fleecing. He expected her to treat us as if we were his family and give us the honest prices, which they did. After a pleasant meal of Mapo Dofu (natch), Tea Smoked Duck, Fish Soup with Preserved Vegetables, Spicy Cucumber Salad, Chicken and Chilies, and Twice-cooked Pork, we were only about USD $30 lighter in the wallet.

Earliest but not least in the day we toured a neighborhood market to get a sense of all the ingredients that go into this Sichuan cuisine. The last time I did this in China was with someone who only could translate, but did not understand the culinary elements. This time Guide Tom was extraordinarily useful in cluing me into what every single item was, and how it was used. In addition I was able to point out a few western ingredients that appeared in the market that he was unfamiliar with — okra, for instance — and provide the same kind of guidance. It was a wonderful give-and-take of food knowledge (though I’m sure I learned much more) and it illustrated the flickering shadows of the Sichuan recipes I had read and the few I had attempted like a paint-by-numbers painting suddenly bursting into form. I’m sure I have bored you with other market pictures from other travels, but there are a few striking images that Alison captured (allowing me to focus on Tom):

We arrived late in the market day (at 10:30am) to avoid the crush of regular shoppers 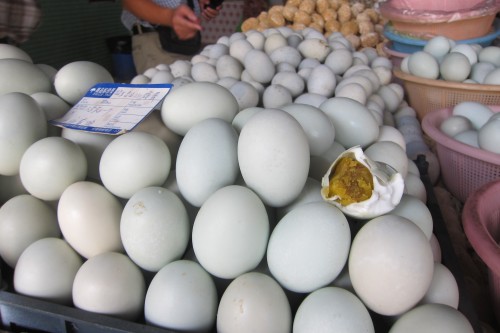 Preserveed duck eggs, which are a wonderful addition to Congee soup

Everything is very clean, but there is NO hiding what meat is or where it came from…

The day began as it ended, with a relaxed walk alongside the BuddaZen hotel. This is our last true day in China. Tomorrow we travel back to Beijing, and Thursday we fly back over the ice cap to Toronto and then Boston before beginning the slow journey back home. There is so much left to say about our visit on the other side of the world, but this is not the best place to do that. I hope we will see you soon when we can elaborate.