Here are (some of!) the spoils of our holiday visit to the Bay Area — Ratto’s own White Wine Vinegar and California Olive Oil sparkling — sparkling in the Maine winter sun.

In Maine we say that summer has peaked and is now coasting downhill toward the dark valley of winter when the goldenrod heads erupt in a spray of gold the sun’s light that has blanketed our fields and pastures since the end of Spring’s rain. 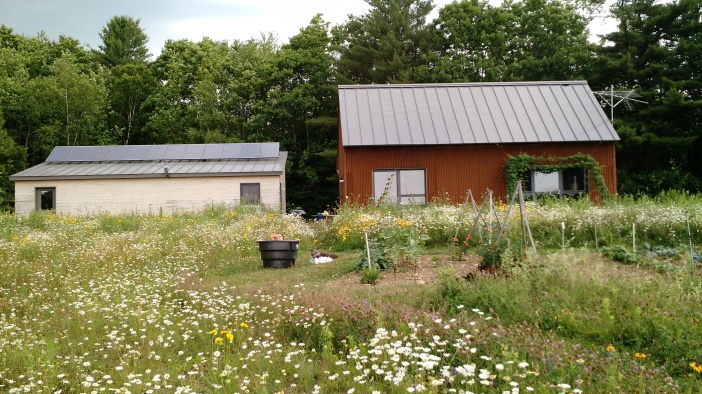 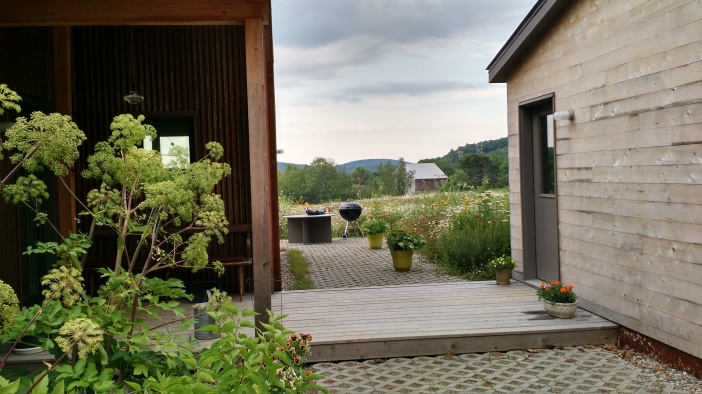 Our last “foodie” stop on our trip was in another mountain area, north west of Coonoor and back in Karnataka state but right on the Kerela border, referred to as “Coorg” although that seems to be a colonial era term and is not found on any maps. Significantly we would be entering a dense chunk of the Tata Empire as guests of their hospitality division surrounded by tens of thousands of acres of their agricultural division which they proudly announced that they sold most of their coffee production to Starbucks.
END_OF_DOCUMENT_TOKEN_TO_BE_REPLACED

The view from the upper bungalow at Acres Wild Farmstay, Coonoor, Tamil Nadu

Our journey after Melkote began with being picked up by a driver and his car as we said our goodbyes to the Kouragi family and thanked them for hosting us. We had arranged through a travel agent that specialized in culinary focused travel to visit a cheese maker, and to visit a coffee plantation before we had to leave India. We had four nights left, and two of them would be spent at Acres Wild, a “22 acre, family-run organic cheesemaking farm and farmstay” according to their website. First we had to get there.
END_OF_DOCUMENT_TOKEN_TO_BE_REPLACED

The US State Department selected me to serve as an Art Envoy to Doha in Qatar on the Persian Gulf.

Your tax dollars are paying for cultural exchange which I think is important particularly at this moment in American political life.

END_OF_DOCUMENT_TOKEN_TO_BE_REPLACED

Sambar in the cup, pepper pickle, mint coconut chutney, and a stir-fry veg main dish surround a Finger Millet cake (Ragi Roti) on my plate at one dinner.

Some of you may know that the title is NOT an invitation to dance (though, feel free…) but to eat a lentil-ish soup/stew that is served throughout the South India areas we visited on our trip. In fact it seems to be a central dish to the local cuisines, served all day in a little (often metal) cup beside your roti (bread) and/or rice, and the main dish (vegetable or meat). I found Sambar SO satisfying that I was often tempted to consume multiple cups of it in one sitting, though the local consumers appeared to treat it as a complement to the main dish and primarily for moistening and flavoring your bites of bread and rice in combination with the main dish.
END_OF_DOCUMENT_TOKEN_TO_BE_REPLACED

There are several large reservoirs in southern Karnataka which allows for constant irrigation, even in the dry season of crops like coconut and rice and sugar cane which are major cash crops in the area.

The agriculture was just so different than anything I’ve ever experienced I kept a list of all the food crops I saw being grown, followed by a few crops I did not see being grown but saw offered at the markets.
END_OF_DOCUMENT_TOKEN_TO_BE_REPLACED

We had seen Jackfruit, the largest tree-grown fruit on Earth, occasionally in asian grocery stores, at asian market stalls, and on Wild And Crazy Food shows on TV, but we had NO IDEA what we would do with it if we ever wanted to eat one, so we had never tried.
END_OF_DOCUMENT_TOKEN_TO_BE_REPLACED

Sign on the dining room wall in our resort “bungalow” amid the coffee and pepper plantations of Coorg in Karnataka, India.